50 Most Influential Blogs in Malaysia

One of the topics that came across my mind last weekend was to compile 100 of the most influential blogs in Malaysia .

Currently, there’s no straight forward formula that I could use to determine who the most influential bloggers are in the Malaysian blogosphere. Granted, I could have utilised any metric to come up with a list but does it really represent the real influential blogs list?

I’ve decided to use Technorati to rank blogs for several reasons. While I am aware that it’s not without its flaws, the lack of other reliable and readily accessible metrics has made me think that Technorati is the best option I have.

One of commonly available metrics used to rank a site is the Alexa Traffic Rankings. The problem with Alexa is that it’s highly unreliable because it’s biased towards tech savvy or webmasters traffic. In addition, it has a limited reach and the only traffic counted is from those who have the Alexa toolbar installed in their browser. 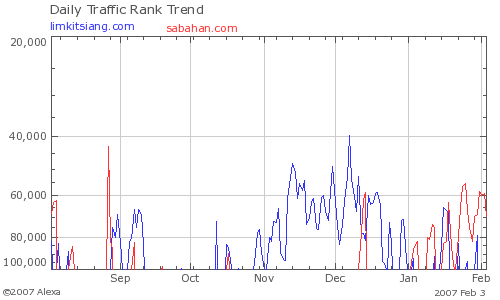 Other metric that I could’ve considered using was the number of Bloglines or Feedburner subscribers a blog has. Problem is, the number does not always correspond to a blog’s traffic level where it can be used to gauge a blog’s influence.

Take KennySia.com as an example, it gets an average of 14,000 visitors per day but its Feedburner count indicates only 90 readers have became subscribes to the blog. Basing one’s judgment on this metric alone would exclude kennysia.com as one of the most popular blogs in Malaysia .

I suspect one of the reasons for the lower than expected count is that, local blog readers might prefer to visit a blog directly rather than reading it via their feed readers. This observation is based on my own Feedburner statistics where I found that most of my feed subscribers are coming from the US and the UK .

Other metrics such as Sitemeter could be useful but only a handful of blogs enable public access to their statistics.

The next question one should ask is â€œwhat defines influenceâ€?

How about the niche where your blog belongs to? Shouldn’t it be taken into consideration when determining a blog’s influence? Surely a popular political blogs such as that of Jeff Ooi Screenshot is more influential than a personal blog such as KennySia.com right?

So, ideally I should come up with some kind of formula that take all the above into consideration to gauge the influence of a blog. But since I’m not writing a PhD thesis here, I’ve to come back to using Technorati to get some idea of who are the most influential bloggers in Malaysia .

Technorati ranking is based on the number of links pointing at a blog in the last 180 days. The 180 day window means that ranks and link counts go up and down.

Technorati ranks a blog relative to other blogs in the world. In a way, it shows how much impact a blog has on the blogosphere in general.

Note that since blogs often have the same number of blogs linking to them, several blogs can share a ranking. The reason why I’ve selected top 50 blogs and ignored 51 to 100 is because this range can be sketchy.

Obviously more blogs share the same lower positions and it’s impossible to find all these unreported number of blogs that have the same rankings.

The Disadvantages of Using Technorati

One big problem using Technorati ranking to measure a blog influence is that it considers all links to be equal. So does it really measures a blog influence (aka authority) or merely states the popularity of a blog? Obviously these are two different things.

Another problem with Technorati is that the ranking system can be easily manipulated. Given enough motivation, a group of bloggers can move up the rankings by constantly linking up to each other blogs.

Similarly a blog’s rank can climb faster due to the link exchange activities conducted by an overzealous blogger. Obviously it would get harder as you climb up the ranking tree.

A blog’s ranking could shoot up through the roof if a post or the blogger suddenly becomes popular (Rocky’s Bru? ) or a post got into the digg.com’s front page.

Old timers would naturally enjoy higher rankings because of the higher number of inbound links accumulated over time. This is obviously not one of Technorati’s disadvantages.

Those bloggers who are offering free WordPress themes would have a better chance to rank higher in the list because their blog’s link would appear all over the place. Two of such bloggers who made it into the top 10 are Sapiensbryan.com and alexallied.com.

While there’s nothing wrong with giving away free themes, this practice can still influence a blog’s ranking regardless of its content. Just for the record though, I think Sapiensbryan.com andalexallied.com have some good content in their blog.

There are several reasons why a popular blog is not included in the list.

Despite the obvious shortcomings of how Technorati ranking works, I would say that it’s still the closest I can get to determine who the most influential Malaysian bloggers are.

I believe the number of inbound links correlates to a blog influence and authority to a certain degree. I don’t know to what extent but certainly it can’t be dismissed.

Wisdom of the Crowds

While the Malaysian blogosphere is a vibrant and diverse place, there are few well-established blogs which occupy ranking below the 15,000 mark.

The top 50 list below is by no means definitive or accurate. Having said that, let this be a starting point to get some insights into who are the most influential Malaysian bloggers.

If you know of any blogs which should be in the list (according to Technorati), please let me know in the comment section. Hopefully with everyone’s help and participation, the list will reflects the â€˜real’ top 50 more closely.