Setting up an AdWords site-targeted campaign is a good way to promote your blog either to a large audience or to a precise audience without burning a hole in your pocket.

While AdWords can be a good source for high quality traffic, for the uninitiated it can be a frustrating experience especially if you continue to get low CTRs for your ads while spending more than what you’d like.

Getting the right results with AdWords campaign doesn’t have to be a wild guess as long as you know how to do it correctly.

As promised in my previous post, I am going to share some tips how to setup AdWords site-targeted campaign the right way.

For a site targeted campaign, you’ll be charged by the impressions (CPM) your AdWords ads get rather than by the click. You can handpick any sites in the Google content network where you want your ads to appear.

Here’s how to do it step-by-step. This article assumed you have signed up with Google AdWords, if you haven’t, then

Once you’ve identified the site you want to target, click the â€œsite targetedâ€ link to create a new site-targeted campaign.

Next fill out the necessary information such as your campaign name, your new ad group name, target customers by language, and target customers by location. If your blog is in English, be sure to select â€œEnglishâ€ only. Otherwise, you’ll be wasting valuable ad impressions if your ad is shown to someone from China who doesn’t read English.

Since this is a site-targeted ad, I tend to select All Countries and territories under the â€œTarget customers by locationâ€. 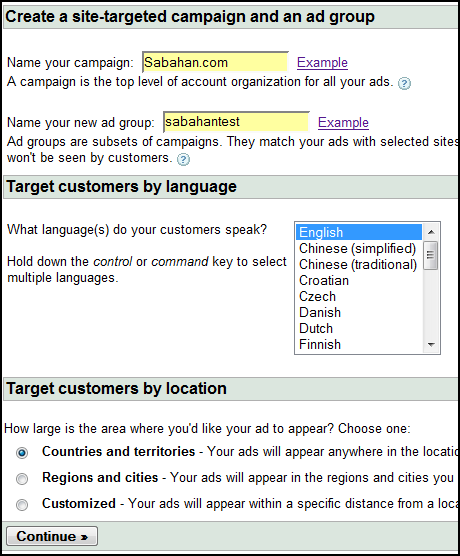 If you are creating a keyword targeted campaign, it’s important to show you major keyword in the ad’s headline. The second line should include a benefit that you think most people are looking for and the third line should contain a feature.

However since we are creating a site-targeted campaign, you have to think in terms of what the site readers are looking for. Remember, the ad is not about you but what your potential visitors will get when they visit your blog. 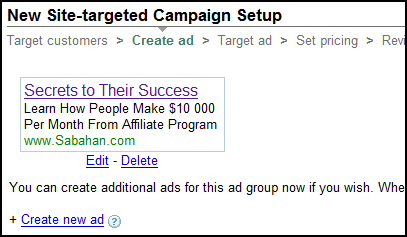 At this stage, most AdWords advertiser will target a site and set the campaign off on its own. 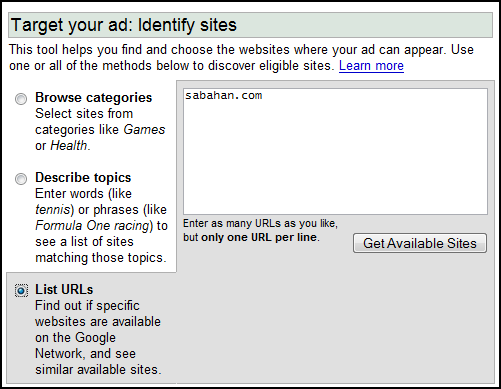 However, before we get there, there’s one more important thing to do, that is to create a second ad for split-testing purposes.

How do you know the ad you currently have is the best ad it can be? Well you don’t. That’s why you need to do split testing as it allows you to get a clear idea what actually work in real time.

If done correctly, you’ll make steady improvements in your ads CTRs, and ultimately attract more traffic at a lower cost. This was demonstrated clearly in my John Chow Dot Com AdWords experiment where I showed a gradual improvement in my ads CTRs.

You can split test as many ads at a time as you like but I personally like two at a time. Google will rotate the two ads evenly. Later you can pick the winner, delete the loser and create a new ad to beat the winner. 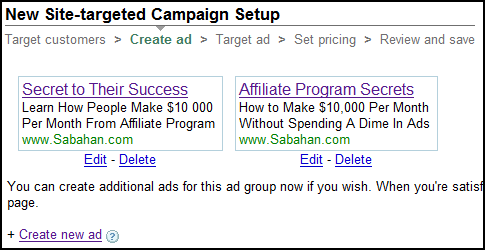 However, in order to show your ads more evenly for split-testing purposes, you need to change the Ad serving option under Edit Campaign Settings to Rotate: Show ads more evenly as shown below. 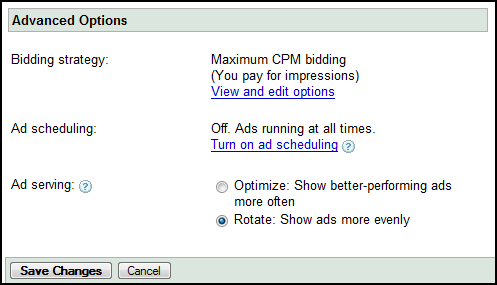 I usually set a relatively high daily budget and the maximum CPM initially and reduce them later once the ads performance has improved. The amount depends on your budget, and how much traffic you expect to get from the site you are targeting. 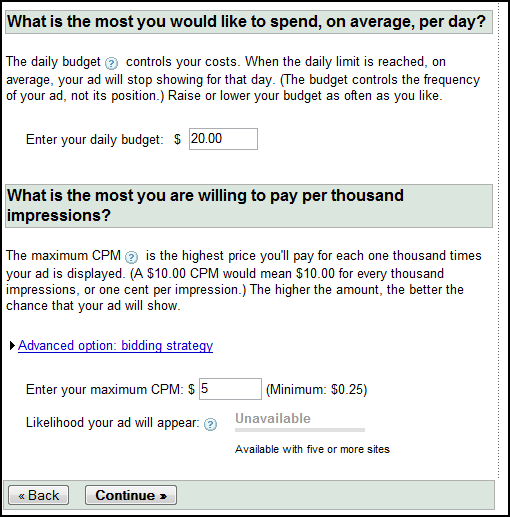 In the final stage, you’ll be able to review and edit your campaign. Click Save Campaign if you are satisfied with everything and your new campaign is now active.

What to Do Next?

Just keep an eye on your ads performance and continue with the split testing process. I usually start removing bad performing ad when I get 20 clicks or more for both ads.

I’ve written several posts about AdWords recently which I hope will give you some ideas how to improve your AdWords ads performance. Check out

Keyword targeted campaign is where the advertiser selects keywords (as oppose to a site) that will trigger ads from the campaign, keyword-targeted ads can appear on search results pages, on content pages, and on other properties on the Google Network.

After my AdWords experiment at John Chow Dot Com, it seems that John no longer allows me to target his blog. That’s funny because that’s exactly what had happened to him when Darren Rowse banned him from site targeting ProBlogger.net. I guess he didn’t like the idea I am revealing too much of his ReviewMe results.

If you have any questions, or suggestions, please leave it in the comments.